You are here: Gaming and other Nonsense » Against the Giants 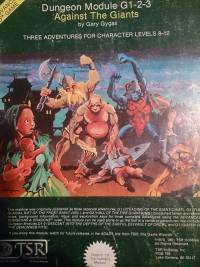 This adventure series consists of Steading of the Hill Giant Chief, Glacial Rift of the Frost Giant Jarl, and Halls of the Fire Giant King. They are amongst the earliest of the published Dungeons and Dragons adventures (for 1st Edition AD&D).

I ran this campaign in 2004 using 3rd Edition rules. After failing to find enough giant miniatures, I finally settled on some cardboard counters to represent the 'bad guys' in combat. This was a lot cheaper, easier to carry around, and made book keeping a lot simpler, since each counter can be marked with remaining hitpoints (I wasn't bothered about the players knowing this), spell effects and so on.

The counters may or may not be useful to others, but since they're done using HTML, they should be easily customisable to any adventure.

The whole set of counters is is available as an archive.

I made the Hill Giants a lot easier (3rd edition giants are a lot harder than 1st edition giants), but splitting them between different farms, and using a lot of young giants as well.

For the Frost Giants, I added some undead and creatures from the Book of Vile Darkness to this lot, just to spice things up a bit.

The Fire Giants include lots of giants, some big dragons and Drow.